“You have a place on the reserve list of the Fred Whitton.”

The words that filled me with so much excitement, followed by extreme self doubt, disappointment, then guilt at not taking an opportunity I’d been fortunate to receive.

I clicked the link and signed up.

One of my last cycle rides involved pulling over to the side of Gummer’s How, slumping over the handle bars and crying. I expected to muster the courage to clip back in and cycle the last 10m to the bottom of the hill, but that courage never came. I got off and ran my bike to the bottom, admitting that a day when I’m tired and hungover might not be the one for tackling my fear of downhills.

I’m not the kind of person who gets scared: I love the feeling of surrendering control to a roller-coaster; when I climb I think if I fall, I fall; I love passing people as I hurtle myself over rocks running downhill. But when I cycle, I can’t seem to shake the fear of smashing my body into a million pieces on the tarmac.

Apparently the frontal lobe doesn’t develop properly until the age of 25. It’s the part of the brain that calculates risk. That’s the reason under 25s pay more for car insurance (it’s not ageist, it’s science). I’m 28 and I’m becoming more of a wuss all the time.

But now I’m in the Fred. If I’m going to get to the bottom of every Lakeland pass, including the truly terrifying Hardknott, I’m going to have to get over this fear of cycling downhill.

It started with research. If I understand the theory and improve my technique, perhaps I can control my mind. Consulting Google was helpful. I learned:

That last one in particular was a revelation. It makes complete sense and perhaps others just realise that with common sense, but it never occurred to me. It makes me feel I’m in control of the turn, not the bike, and can be more aggressive with the way I drive it.

Then I met a lady called Gwen Moffat. She deserted from the army to spend a life climbing in the mountains. She had adventures and was never afraid. A film about her sparked a twitter campaign #WhatWouldGwenDo? You know what, she wouldn’t even have brakes. She’d go for it and banish fear. I’m trying to be more like Gwen.

My next ride was a night ride with a friend who is a much better cyclist. The dark meant I couldn’t see the road surface to worry about and I could see the headlights of the cars long before they approached the corners. I loved it and gathered speed as I told myself I was ok and would feel much more stable without the brakes locked on. It worked. I fell in love with cycling again.

Today I stopped finding excuses and went out and cycled 100miles, including the Struggle up from Ambleside and going down the Kirkstone Pass into Glenridding. I used the drops for the small downhills, then the medium ones and my heart is no longer consumed by terror. 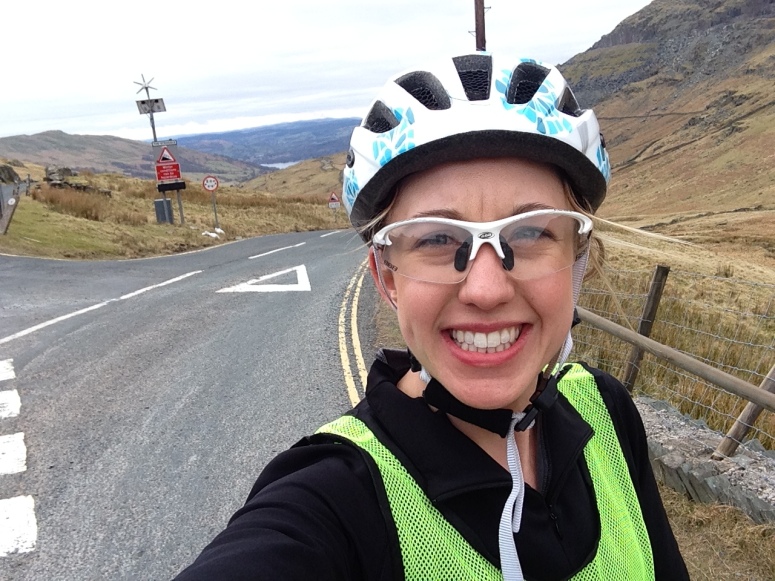 Send me the details at fiona.marley.paterson@itv.com